Was Jackson’s semen found on his nudist magazines?

Posted on March 5, 2019 by jacksonallegations

I was not sure if I should even address this rumour circulated on the Internet, because it is not a claim that was made by the prosecution. It is simply an Internet myth, plus the discussion of it is very graphic. But I realized how much even Internet rumours and myths (and especially salacious, graphic ones) can spread around and become people’s “truth” if they hear them repeated enough. It is also a good example of how misinformation and myths are created when it comes to this case – by twisting facts, operating with half-truths and jumping to conclusions based on incomplete information, without doing a proper research first.

So I eventually decided to address this myth.

The claim in the Internet rumour is that Michael Jackson’s semen was found on the nudist magazines confiscated from his home during the 2003 November raid. The significance is, according to the argument made with this claim, that while Jackson’s semen was not found on his heterosexual adult magazines, his semen was all over on his nudist magazines which, among other things, contain images of nude children.The indication is clear: that Jackson supposedly masturbated to the images of nude children.

Salacious enough to capture the attention of people. However, the claim is totally false (sloppy “research” at best, deliberate misinformation at worst), and the only thing the “researchers” behind this misinformation should have done was reading the transcripts of Jackson’s 2005 trial to know that.

First of all, it has to be noted that while these vintage nudist magazines  that were found in  Jackson’s possession (mainly from the 1930s and some from the early 1960s) contain some images of nude children (usually from the distance or in a family surrounding), their focus is  overwhelmingly on nude adult females. So even if the above claim about his semen being found on them was true, it would not mean that Jackson masturbated to the rare images of children in them. But the claim is not even true. 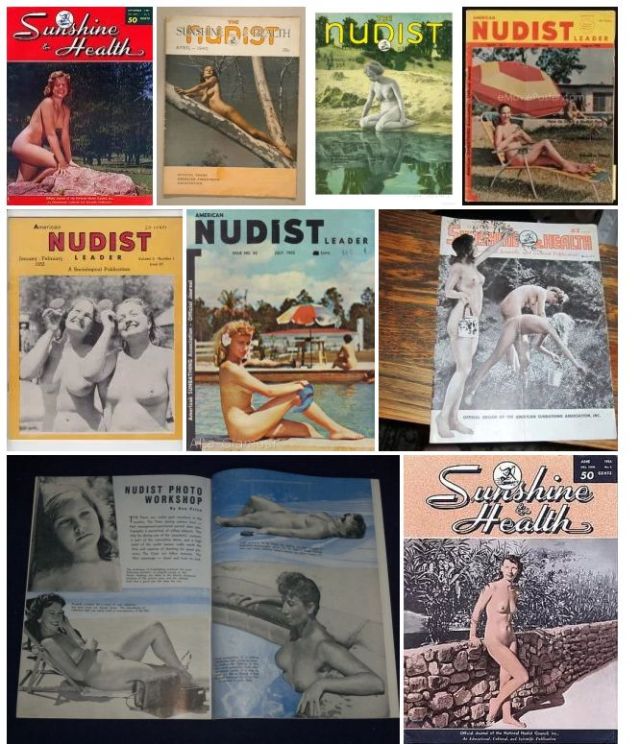 The kind of nudist magazines found in Jackson’s possession

At first I was very perplexed by where this claim came from, because I have read about this case extensively, I read the court documents, the trial transcripts but I have never read about such a claim from the prosecution or anyone. So what is the basis of it at all?

I went back to the trial transcript again, read the expert testimonies, read the testimonies about the use of ALS (alternate light source), read about what was said about these nudist magazines on trial by the prosecution’s own experts and police officers and I found nothing at all. Nothing that mentioned that Jackson’s semen was found on them. If fact, not even his fingerprints were found on them and when Janet Willams, the police officer who confiscated them, testified on April 19 about them she admitted she had no way of telling if Jackson ever opened these magazines. Obviously, semen from Jackson on them would be a clear way to tell that he opened them if such an evidence existed. And if this evidence existed, it would have been mentioned by the prosecution at some time in court. Instead the prosecution spent days on tedious fingerprint talk and analysis on Jackson’s heterosexual adult magazines, but not one mention about semen being found on nudist magazines.

By the way, from Janet Williams’ testimony we also learnt that District Attorney Tom Sneddon either was mistaken or deliberately lied in one of his motions and also in his opening statement at the trial about the location where the nudist magazines were found. He claimed that they were found in the upstairs bedroom section of Jackson’s room at the base of his bed along with MJ’s hard core pornography. Well, officer Williams clearly refuted this claim. She said that she found these magazines in the downstairs, sitting room portion of Jackson’s room in a box that otherwise had all kind of other books – not pornography.

And there it was! No, not the claim that Jackson’s semen was found on the magazines, but the basic document that these self proclaimed “researchers” twisted into that. Here it is: 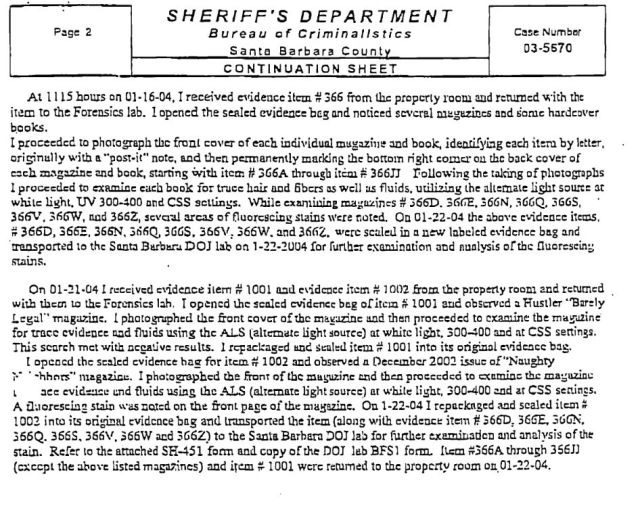 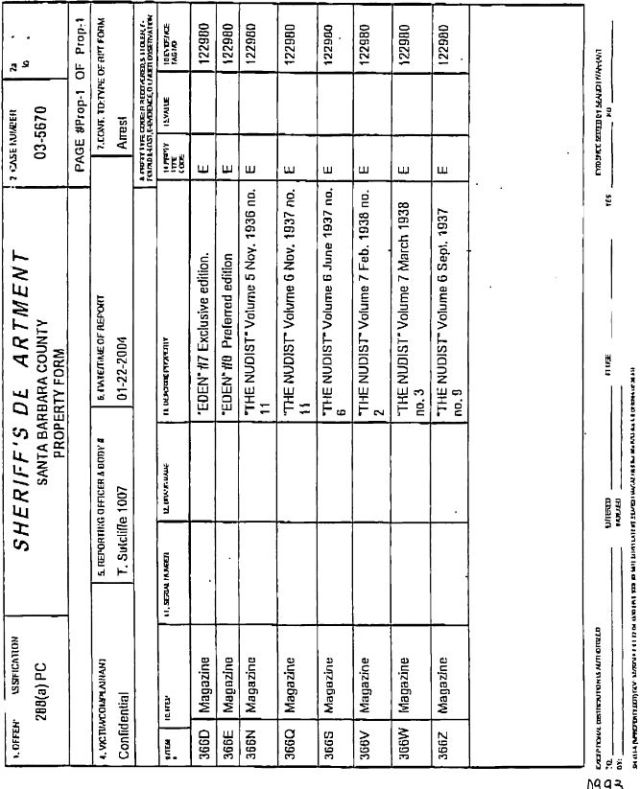 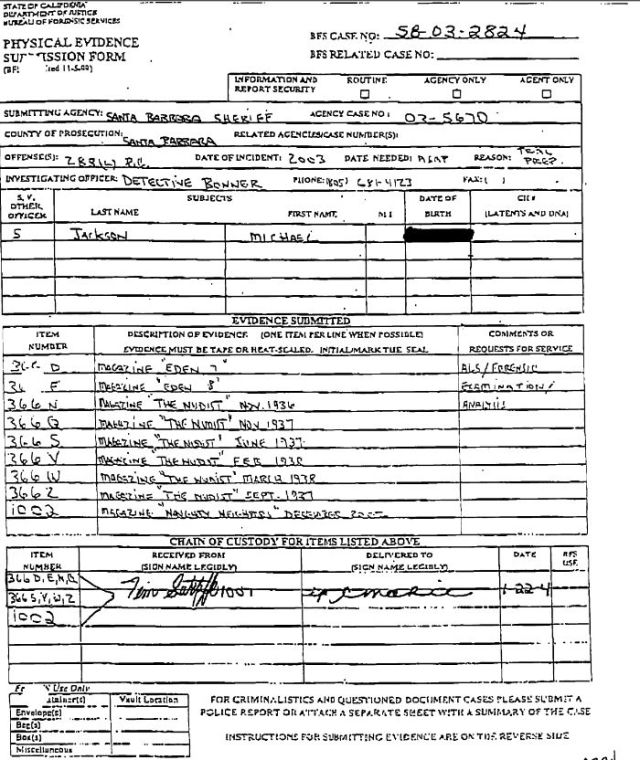 What is this document about?

It is an extract from an evidence sheet sheet by The Santa Barbara County Sheriff’s Department. What it says is that, characteristic for the prosecution’s “no stone unturned” approach, they used an Alternate Light Source (ALS) detector on the magazines to see if they find anything that they can use. Because ALS testing showed some fluorescent on the surface of these particular magazines, they sent them to the Santa Barbara Department of Justice to further testing [30]. This was enough for some self-proclaimed “researchers” to jump to the conclusion that Jackson’s semen was found on these magazines.

The document does not say that, though – and if they had done some more research – eg. had the read the trial transcripts then they wouldn’t have embarrassed themselves with this conclusion.

What happened was explained in detail in trial testimonies by the prosecution’s forensic experts who told the jury that ALS is a device that detects anything of biological origin: hair, fiber, saliva, blood, semen, sweat. If such a fluorescent shows up on one surface of an item then the item is sent to a laboratory for further analysis (eg. DNA analysis) to see what it is exactly and whom the DNA belongs to.

From the March 24, 2005 testimony of Lisa Susan Roote Hemman, a senior identification technician in the forensic unit of the Santa Barbara County Sheriff’s Department:

“Could you explain that for us, please?

I was asked to do a visual inspection of the contents, and I used an alternate light source which goes into the UV wavelengths. And when you look — search for body fluids, they will fluoresce under UV light, and anything that seemed to fluoresce, it could be body fluids, but it could also be other things. My job was to find items that weren’t on the paper when they were published, they were placed there later. It could be anything that fluoresced. And I separated those items out for further testing. And when I did that, I repackaged them into another bag and I sent them to the Department of Justice Lab to find out what those fluids or deposits were.

How did you mark on a specific item where you suspected there may be some kind of body fluid or other substance that was foreign to that magazine or picture?

Later in Hemman’s testimony some more was explained about ALS and what it actually detects:

Or any trace evidence, hair, fibers.

And an alternative light source, can you describe that briefly?

Let me stop you for a second. We’ve already had a little testimony. What color is it, and did you wear goggles, or was there a different color? What did you do?

Yes, it’s basically a light source that goes through numerous wavelengths, mainly in the UV, and I wore orange goggles which narrows the band down and helps you see things fluoresce, or absorb the light, turn dark. And so basically I just went page by page, wearing those orange goggles, and using the UV light and examining each piece of paper.

All right. Is this destructive of the evidence to do that?

No. The CSS — the light source has dials on it, which dial each wavelength, and the CSS is the one that we use mainly for searching for body fluids, and that one is not, as far as I know, destructive to DNA evidence.

Okay. It’s not destructive to the paper?

Okay. So when you do an alternative light source examination of that sort, you can then do other tests on the materials –

It’s harmless to the evidence that we looked at.” [1]

On the same day a senior criminalist of the California Department of Justice at the Santa Barbara Regional Crime Laboratory Charlane Marie testified about the results of their analysis of the fluorescents that were sent to them by the Santa Barbara County Sheriff’s Office and she stated that they had found nothing that could be used against Jackson.

Okay. Is that what you were looking for?

I was looking for biological material, yes.

The question is, did you find any?

So as far as you could tell, there was no DNA to be tested from the materials you were sent?

There’s nothing you felt — just to make it clear, I’m not trying to trap you here, but there was nothing that you found and you said, “Ah-hah, we ought to send this off to Sacramento or have a DNA lab do a further analysis of this”; is that correct?

You pretty much packaged it back up and sent it back to Santa Barbara?

Moreover, the prosecution never claimed in court that they have found Jackson’s semen on any magazines. It is simply an Internet myth.