Posted on December 27, 2016 by jacksonallegations

In the hindsight, when they made their allegations, the Arvizos claimed that during this period, February 7-March 12, 2003, they were kept captive at Neverland against their will. During their alleged captivity the Arvizos went shopping several times, visited a lawyer, talked to Child Protective Services because of the Martin Bashir documentary and appeared in a Court regarding a child support debate with Janet Arvizo’s former husband, yet they never reported to authorities that they were allegedly being kidnapped and held against their will at Neverland. The Arvizo’s claim was that Jackson supposedly kept them captive to force them to participate in the so called “rebuttal video”. This allegation is what the conspiracy charge deals with and we discuss it in detail in the next chapter entitled The Conspiracy Charge. 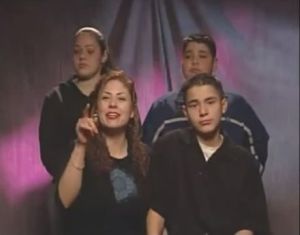 The Arvizo family during the shooting of the so called “rebuttal video” on February 20, 2003

Initially the Arvizos would have been featured in that “Take Two” documentary (or as it was called in Court, “the rebuttal video”), but at the end their segment was not included. However, the footage with the Arvizo family was made for the documentary. It was shot early in the morning of February 20, 2003 and later found by the prosecution when they searched Moslehi’s home during the Jackson investigation. As a result the Arvizos changed their initial timeline of the allegations.

Initially the Arvizos claimed that the molestation started as soon as they returned from Miami with Jackson, on February 7, 2003. This is also represented in the prosecution’s initial felony complaint, filed on December 18, 2003 [1]. The Arvizos’ segment of the “rebuttal video” however was shot on February 20. The videos of it can be found on YouTube:

In the videos they are seen laughing and joking, happily praising Michael Jackson. They also express their displeasure with Martin Bashir. When they made their allegations initially they claimed that they were under duress, but behind the scenes footage showed them not only laughing and joking, but making suggestions themselves about what they wanted to do on film and in the second video they are even seen being surprised that they were on camera while making those suggestions. They certainly do not seem to be forced or under duress by any means.

The resulting timeline change was not just a minor correction. It significantly changed the narrative of the Arvizos’ initial story.

On February 20, the same day as the Arvizos’ segment for the “rebuttal video” was shot they also got a visit from the Los Angeles Department of Children and Family Services (DCFS, also mentioned as Child Protective Services – CPS). They interviewed the Arvizo family because a teacher from Gavin’s school filed a complaint over the claim in the Bashir documentary that Gavin had slept in Jackson’s bed. Again, the Arvizos said nothing but positive things about Jackson. They denied molestation and never claimed that they had been supposedly “kidnapped” or held against their will. In actuality, this meeting with the DCFS took place at Major Jay Jackson’s (an army officer, no relation to Michael Jackson) home who was Janet Arvizo’s boyfriend at the time and later her husband.

To explain why they did not tell anything negative about Michael Jackson to the DCFS the Arvizos had several versions of their story: initially they claimed it was because Jackson and his people intimidated them. According to the prosecution’s Statement of Probable Cause (November 17, 2003) document on August 13, 2003 Gavin told them:

“Gavin was asked why he did not disclose anything to the CPS people. He said by then they were really afraid of Frank (Cascio) and Michael.” [2; page 60]

His brother Star too claimed on the same day that the reason why they had not disclosed anything to the DCFS was intimidation by Jackson and his people:

“When asked during the CPS interview why he did not disclose anything about what was going on with Michael’s people and Michael himself, Star replied that Michael had scared them by threatening them that he was going to kill them. He then clarified that it was not Michael that actually made the threat, but “Michael’s people.” He was asked if he was personally threatened or if he heard a threat, and he said yes. Frank told him that if Star didn’t protect Michael, something bad would happen to the family.

The threat was made at the snack area of the theatre at Neverland. He was the only one there at the moment. Frank made another threat a couple days before the CPS meeting. Star was asked if Frank knew that they would be meeting with the ladies from the Child Welfare Services, and he said yes. When Star was asked why he thought Frank had made that threat, he said, “Because he already knew what Michael did to us.” If they had told the truth, Michael would have gone to jail. “ [2; page 51-52]

This is, however, totally contradictory with the later version of the Arvizos’ story, in which they claimed that the molestation started happening only AFTER the DCFS’s visit and that is why they did not disclose anything to them. In actuality, in 2005 in Court Gavin testified – according to the latest version of their story – that on February 20, when they shot the “rebuttal video” and when they were interviewed by the DCFS, they still considered Jackson to be a good person and they had no problem praising him.

Under cross-examination by Jackson’s lawyer Thomas Mesereau the boy stated that most of the things that they said in the “rebuttal video” reflected their true feelings about the entertainer at the time. He talked about some lies that they told – allegedly at the request of one of Jackson’s people, Dieter Wiesner – but these were only exaggerations about how much Jackson was really there for him during his cancer or how much part he really played in his healing. However, on contrary with his and his brother’s earlier statements to the police, on the stand Gavin clearly stated that when they made the ”rebuttal video” they still felt that Jackson was a great person. Gavin also said that he had a good time at Neverland (“I liked being there.”[3], “I was actually happy to be at Neverland all the time.”[4]) and did not give the impression they were afraid of anything there.

So in the new version of their story, and this was the version they presented in Court, the Arvizos did not tell the DCFS simply because no molestation had happened yet on February 20 and not because they were intimidated by Jackson and/or his people, as they initially claimed.

(Dr. Lieberman is the same psychiatrist who together with attorney and TV personality Gloria Allred also filed a complaint against Jackson for the so called “baby dangling incident” and campaigned for Jackson’s children to be taken away from him. Then later in 2003 Allred represented a 18-year-old young men, Daniel Kapon, who claimed he had been sexually molested by Michael Jackson when he was a child. Kapon claimed he had “repressed memories” of the molestation and therefore only recently recalled the abuse. It was Dr. Lieberman who “helped” bring forth his “repressed memories”. During an investigation into the matter by the Santa Barbara Police Department it emerged that in reality Kapon never even met Jackson. We discussed Kapon in detail in the earlier chapter entitled The Media’s Role In The Allegations Against Michael Jackson.)

After the change in their timeline the Arvizos claimed that Jackson had molested Gavin between February 20 and March 12, 2003 [5]. So the story that the Arvizos eventually ended up with because of the forced timeline change was that Michael Jackson had started molesting Gavin Arvizo WHILE all this was already ongoing: a public outrage because of the Bashir documentary, as a result of that documentary innuendo and allegations in the media about Jackson’s relationship with children, and specifically Gavin Arvizo, a high media interest, tabloids trying to “hunt down” the Arvizo family, a DCFS investigation, another investigation by the Santa Barbara County Sheriff’s Department, Jackson’s PR and legal team working overtime on damage control because of the public relations backlash resulting from the Bashir documentary and its innuendo. To believe the Arvizos’ story you have to believe that all WHILE this was happening Jackson suddenly started molesting Gavin Arvizo, even though for three years he had not touched him and not even trusted him and his family. You also have to believe that even though he had not molested Gavin until all these investigations by the DCFS and the Santa Barbara County Sheriff’s Department began, he started molesting him WHILE these investigations were ongoing. This is exactly the story that the Arvizo family ended up with after they were forced to change their initial timeline because of the discovery of the so called “rebuttal tape”.

It is also worth considering some other information that came out during the trial about that February 20-March 12, 2003 period that showed that even during that period Jackson and the Arvizos hardly stayed at the same place in the same time. We know that between February 25 and March 2 the Arvizos were not at Neverland but stayed in a hotel in Calabasas. Moreover phone logs presented by the prosecution towards the end of the presentation of their side of the case inadvertently revealed that in early March Jackson stayed a few days at the Beverly Hilton hotel using the pseudonym Kenneth Morgan (as celebrities often use pseudonyms to avoid attention). From the logs it appears he was there at least on March 7-8, but possibly also on March 6, while the Arvizos were at Neverland. Based on the phone logs it also appears that on February 20 Jackson was at the Turnberry Isle Resort in Miami, Florida. [6] The testimony of Azja Pryor (actor Chris Tucker’s girlfriend at the time) confirmed that Jackson was not at Neverland on February 20. [7]

[2] Statement of Probable Cause (filed by the Prosecution on November 17, 2003)
https://themichaeljacksonallegationsblog.files.wordpress.com/2016/12/plugin-111703stmtpc.pdf